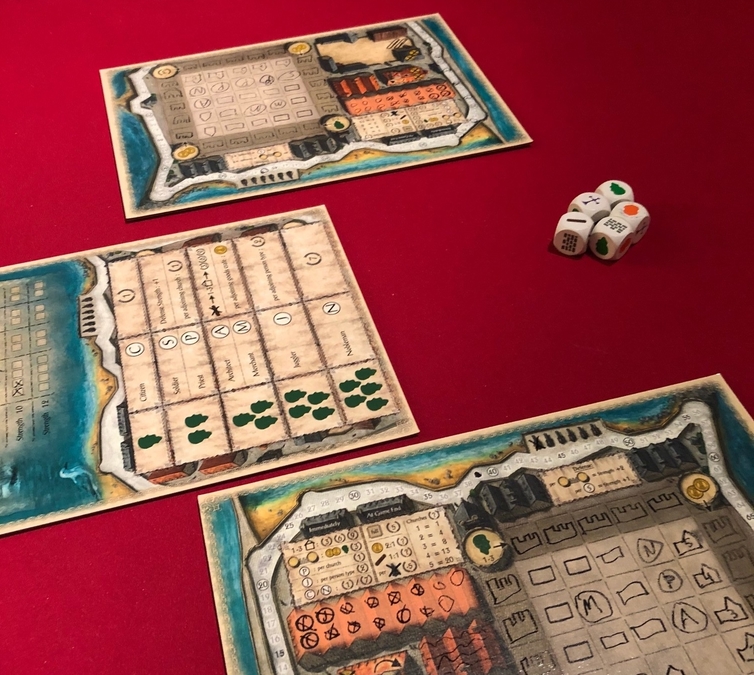 Saint Malo - which I snagged as a free gift at BGGCON 2018 - is a pretty straightforward roll-and-write, where you roll dice and build things on your board, which is a castle for your city you are building. At the end - which occurs when someone places the last spot on their city - you score and see who won. Pretty simple, right?

Avast! Ye landlubbers are always so simpleminded. Ye don't know the depths of the city on the Saxon shores!

Each player rolls five six-sided dice that have a variety of symbols on them. These symbols illustrate things they can get - but only of one of the types. You get three rolls, and can decide not to roll certain dice in those rolls. So, think of it like a weird, pirate-y French Yahtzee. With nobles. And walls. And...oh hell, let's just move on.

First off, if you don't like the result, you can always pay 2 coins to change a single die to whatever symbol you chose to pick. Mind you, though, it's not easy to get coins, and you can only have a limited number of coinage, so you'll be doing this sparingly. Once you choose your symbol, you then draw it in a space (or spaces) on your board.

Your board, by the way, is a nice, quaint 7x7 castle sitting on a shoreline. Except, at a huge oversight by local city planners, you've forgotten to build walls, or buildings, or populate it. But you have cannons! Which, by the way, seem to do nothing except lose you points if you lose them. Stupid cannons.

The inside of the 7x7 grid is lighter colored, and is where your town goes. The borders of the grid are where you'll usually put walls - more on them later. Filling your grid at the end of the game gets you a sweet 5 points, which is fairly a lot in this game, so there's definitely an interesting strategy to not trying to min-max points and instead race to the end.

Let's talk about the crate die side first. A nice, quaint orange, these crates let you draw rectangles on a square for each crate you roll. Roll 4 crates and you can plop 4 crates on your board next to other crates. (You start the game with 4 pre-drawn in.) These crates can be used by the Merchant - a type of person (green head die) - who will nab you a sweet, sweet coin for every crate he's adjacent to (including diagonally).

Wood is the next side, and it lets you ship a wood per die (you start with 2) to your city. However, there's a catch - you have to pay 2 gold per delivery (not per log) to get them, so you'll want a wood stash before shipping them. This wood can be used by the Architect to build houses (more on him later; they're quite complicated, these Architect fellows. So pretentious,)

Walls are pretty straightforward - add a wall per die. However, if you fill an uninterrupted line between two corners of your grid, you get a "tower bonus", which is something like 2 coins, 3 points, or a free lower-level person. Also, you get +2 defense, which is incredibly important, but we can't talk about that right now because we need to talk about...

And then, there's people. You roll a green head die, and sum the total of heads you get, and you get a person of that level. You draw a circle with that person's letter on your city. People do a myriad of things - from a simple Citizen netting you 1 point, Soldiers at +1 defense, Priests who get you a point for each church they're next to, Merchants as described above, Noblemen who score a whopping 7 points, and Architects and Jugglers.

Architects let you spend wood to build houses. These houses have to connect to one another (and the architect), and cost 1 wood per house (up to a max of 3 houses), but they get you a nice 3 points per house. You'll want to balance wood acquisition with architect placement to net yourself a ton of points here.

Jugglers give you 2 points for each different type of Person they're next to. Who doesn't love a juggler? This city loves jugglers.

So, this all seems pretty straightforward die management and placement, right? Whomever gets the luckiest rolls and plans their city properly will just win, right?

So there's a pirate part of the board, where after your table rolls a certain number of pirate die (which you must count after rolling your die regardless of what type you chose), they attack. And if you don't match or exceed their strength in your defense, you lose a cannon. Lost cannons hit you for -5 points at the end of the game. In my experience, that can be what decides a game of Saint Malo. At first they're wimps - a measly 1 defense, but that quickly escalates to 3, 6, 8, 10, and a near-impossible 12.

This brings an interesting strategy to play. Not getting good points rolls, but getting lots of walls/soldiers? Just militarize your city and try to roll as many pirates as possible, leaving your opponents dying in the pirates' wake, and you sitting pretty with a nearly-full city to quickly end the game with.

This dynamic is what differentiates Saint Malo from most roll-and-writes I've played. You can't just optimize your point placement; you have to consider your defense level, other players' strategies, and your speed in filling up your board. Go too slowly and you'll miss your chance to get your points; ignore walls and you'll find your church row wont matter when it's burning to the ground by drunken raiders.

Overall the game plays pretty smoothly and fast, and there's not a lot of downtime. There's also not a "winning strategy" that you have to take - different paths, depending on rolls and the table, will get someone the win. This makes replay pretty high for the simple nature of the game, and also leaves you feeling like you can do just a bit better next time. Furthermore, the pirate element really throws a wrench in your plans, as you may have been sailing toward that famous juggler, but now have to pivot to building a wall as fast as you can before all your people perish, leaving you feeling like all your glorious plans are crashing before you.

I love that feeling in a game.

Saint Malo is a good roll-and-write that expands on the genre without overcomplicating it, and the tension of an upcoming end and marauding pirates makes this a keeper for your filler/light game play at a nice 45m-60m size. I'd recommend this game, not because it's amazing, but because it knows what it wants to do and does it well, and is nearly always an enjoying play. 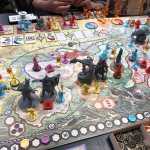 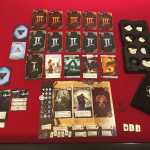 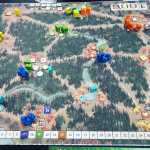 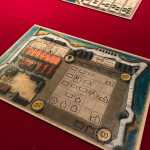